Nigerian writer Chimamanda Ngozi Adichie, who first came to my attention when her novel, Americanah, became a New York Times best-seller, and when audio of a speech of hers ended up in the Beyonce song, “Flawless,” is, as Blavity puts it, *everything.*

I’m such a fan of her feminist views. And, of course, the excerpt in Flawless is the kind of thing that should be required reading in the 5th grade:

“We teach girls to shrink themselves
To make themselves smaller
We say to girls,
“You can have ambition
But not too much
You should aim to be successful
But not too successful
Otherwise you will threaten the man.”
Because I am female
I am expected to aspire to marriage
I am expected to make my life choices
Always keeping in mind that
Marriage is the most important
Now marriage can be a source of
Joy and love and mutual support
But why do we teach girls to aspire to marriage
And we don’t teach boys the same?
We raise girls to see each other as competitors
Not for jobs or for accomplishments
Which I think can be a good thing
But for the attention of men
We teach girls that they cannot be sexual beings
In the way that boys are
Feminist: the person who believes in the social
Political, and economic equality of the sexes”

I can’t help but think of my five-year-old niece when I read her views. This latest one, which, in a perfect world, is taught to every little girl in the world, is from a speech she gave at the 2015 Girls Write Now Awards in New York City, where she was named the groundbreaker honoree.

During her speech, Adichie spoke less about her stellar accomplishments and more about why young girls and women shouldn’t care about being liked when trying to pave their paths as writers and storytellers.

“Forget about likability,” the 37-year-old exclaimed. “I think that what our society teaches young girls — and I think that it’s something that’s quite difficult for even older women, self-confessed feminists, to shrug off — is this idea that likeability is an essential part of the space you occupy in the world. That you’re supposed to twist yourself into shapes to make yourself likeable. That you’re supposed to kind of hold back sometimes, pull back. Don’t quite say, don’t be too pushy … because you have to be likeable. And I say that is bullshit.”

And, with that, I’ll leave you with one of the best little girls to ever grace Vine: 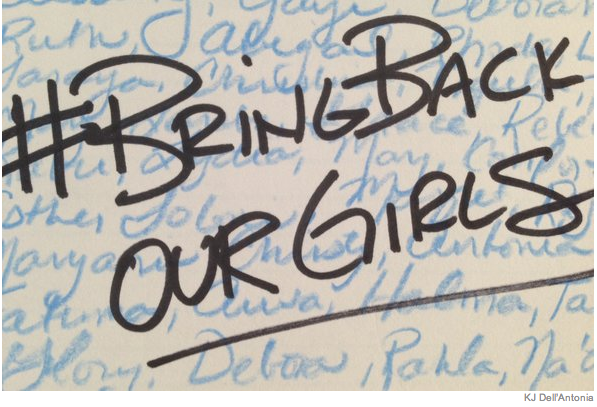 A friend of mine wrote the following on Facebook today and I nodded along while reading, thinking he was dead on: this CAN’T become another #StopKony2012. (Remember that hashtag?)

What can you do:

Think before you act
Do your homework
Evaluate the interest of the parties involved
Organize others
Mobilize interventions that apply pressure politically, economically or socially. (hint: wearing a head wrap does not count)

“In the long run, the best way to fight extremism is education, especially education for girls,” he said. “More broadly, female empowerment isn’t a magic bullet, but it does help create opportunities and bring women out of the margins and give them a voice. One great program is the Village Savings and Loan, which encourages female savings and entrepreneurship around the world and has a great track record.”

Because no number of educated women are a match for men with AK-47s, we also need to support programs that involve men in promoting gender equality, including women’s education and reproductive rights, like the many members of the MenEngage Alliance, and to talk about gender equality in a way that includes men as well as women.

If the missing Nigerian schoolgirls come home, their problems won’t be over. Even assuming (with ridiculous and probably unwarranted optimism) that they have been untouched during their captivity, their communities and even their male family members may regard them as damaged goods. It’s that attitude, writ large, that led to their kidnapping; on the smaller scale, it may mean they can never regain what they have lost.

“Real action” to bring about change for the schoolgirls of Nigeria, and for the schoolgirls and boys yet to come, can come from our laptops, our raised voices and our wallets if we let the passion that this story ignited burn on. #BringBackOurGirls will end, but it won’t be the end of the story. #GenderEquality isn’t a very exciting hashtag. But it’s the only message that could, eventually, mean #NeverAgain.

Via the BK Nation Blog
By Mark Naison

Everyone who knows me well knows two things about me. First, I am a passionately committed political activist. Second that I am a sports fanatic. Here is how the two defining characteristics of my life came together for me and shaped the upbringing up my daughter Sara in a feminist household.

When we got married my wife Liz Phillips and I decided that Liz would keep her name and that we would bring up our children in accordance with feminist principles. This entailed totally sharing childcare, cooking and household chores. We engaged in collective household decision making, and the creation of hyphenated last names for our children — Naison-Phillips — that reflected our commitment to gender equality.

Some men would consider this arrangement to be a burden. Commitment to gender equality carried one huge benefit. When our first child Sara was born, I enjoyed the freedom to teach her everything about sports that my father taught me—how to hit throw and to catch, how to get up when knocked down, and how to walk onto a ball field as though you owned it. I started sports training with Sara when she was two years old. By the time when she was five, I walked her into the St. Saviour’s Youth Sports League, signed her up for baseball, and volunteered to coach a team.

Fortunately, the league let her play…even though the league was 95 percent boys. There, her abilities proved to be something of a revelation. Sara hit, threw and caught as well as all but a handful of boys her age and soon became a star. She batted lead-off and played the coveted position of pitcher’s mound — coaches pitched to their own teams — where you normally placed your most reliable fielder. She won complete acceptance in the league, became a pitcher at age eight when the league made the transition to kids pitching, and even earned a spot on the much sought-after St. Saviours’s travelling team when she reached the age of 10.

In basketball, Sara left her most indelible impression. Fast, strong, tough and capable of doing 40 push-ups as a result of her gymnastics training, she played on the highly competitive St. Saviour’s 10-and-under boys’ CYO travelling team at the age of eight. Over time, Sara became a highly visible figure in Brooklyn CYO basketball, whose participating parishes extended from Marine Park to Bay Ridge to Bensonhurst, to Red Hook and to Fort Greene. All over Brooklyn, mothers who were rooting for their own teams cheered for my daughter when she came into the game and the boys on the other teams found themselves caring less than they were being guarded by a girl and more than they were about to get stripped of the ball by that girl if they didn’t protect their dribble.

That lasted until Sara was 10. That year, she started on the boys’ team that won the Brooklyn CYO championship—beating arch-rival St. Thomas Aquinas of Flatbush in the Championship Game. The Aquinas coaches grumbled loudly after the game, claiming that her presence on the team gave St. Saviour’s an unfair advantage because the boys on other teams couldn’t play with as hard with a girl guarding them. Without informing the St Saviour’s coaches, they launched a secret — and ultimately successful — campaign to ban girls from boys’ CYO basketball.

We did not find out about the ban until a year later when St. Saviour’s 11-year-old team lined up to play Aquinas in the first game of the season. The Aquinas coaches loudly proclaimed “the girl can’t play,” at the beginning of the game, quoting the newly approved league rule. Pandemonium broke out in the gym and I had to be held back from physically assaulting the Aquinas coaches. The referee said he thought the rule was “ridiculous.” The real heroes proved to be Sara’s male teammates, who refused to take the floor unless she played. The result: the game was played under protest with Sara on the court, and I was determined to find out what the hell had happened.

My years of political activism quickly jumped into high gear. After calling the league director and finding out that a rule banning girls from boys’ CYO had been passed, I called friends of mine who wrote for Newsday and for The New York Times and told them what had happened. Within hours they assigned the story to reporters. A day later, front page articles on Sara — including pictures — appeared on page three of Newsday and on page one of the Metro Section of The New York Times. By 7 AM, every television station in New York City called the house to ask to film stories about Sara. Television segments were shot at Fordham in which she shot baskets with the Fordham’s women’s basketball coach and in the schoolyard of JHS 51, where they showed her taking shots with her teammates.

The wave of publicity achieved its desired outcome. By 5 PM, Brooklyn CYO leaders released a statement saying that the rule had been rescinded. Sara and other girls were free to play on boys’ teams if their parish didn’t field girl’s teams.

The drama did not end there. Sara’s story touched a chord with people all over the country who viewed the effort to ensure that girls enjoyed the right to participate at the highest levels in sports as a human rights issue—not merely as a question of justice and of fairness. The New York Times and Newsday published editorials supporting her right to play, a Catholic social-justice group developed Continuing Catholic Development lessons based on what she experienced. Sesame Street came to our home to film a three-minute segment about Sara and about her teammates!

For Sara, who became a nationally ranked tennis player and captain of the Yale tennis team, this proved to be a formative experience in a life of athletic and academic success. For our whole family, this odyssey affirmed the importance of fighting for the rights of all people to realize their potential in all aspects of human endeavor.

A revolution begins with many small acts. This is the story of how one family took the lessons of Women’s History Month to heart.

I wish I had more information to share about this video because it’s bad ass. If features a bevy of Latina rappers who I assume hail from Ecuador (they flash the flag a couple of times in the video) spitting some thoughtful lyrics about women, femininity, the barrios they are from, resistance, activism, and more.