Taken by my friend Carmina Portillo.

At the second annual Bronx Celebration Day on April 21, a Mexican folk dance troupe, Marzarte Dance Company, held hands with Fordham students and local residents for an energetic chain dance around the Walsh Lot of the Rose Hill campus.

Folklorist and choreographer Martha Nora Zarate-Alvarez, who heads the Bronx-based ensemble, said the group’s lively performance represented the traditions of the Huasteco and Jalisco regions of Mexico.

“We wanted to showcase the importance of Mexican culture in the Bronx and traditional Mexican dance,” said Zarate-Alvarez, who was dressed in a multicolored tiered skirt. “Mexican culture is more than just mariachi music.”

Bronx Celebration Day was presented by the Bronx Collaboration Committee, a division of the Fordham Club, and co-sponsored by Bronx Community Board 6, Fordham University Commuting Students Association, Fordham Road BID, and the Office of the Chief Diversity Officer at Fordham University.

You guys know I LOVE the Bronx Zoo. What could make them even cooler? Well, they’ve teamed up with legendary rappers and street artists from the Bronx for a new series, “Boogie Down at the Bronx Zoo!”

First off, there’s a song, which you can stream below. Nothing like legendary MCs rapping about zoo animals! This is wonderful for school-aged children, but I love it, too!

These events, starting on Saturday and Sunday, April 21 and 22, and continuing weekends from May 5 through June 3, will include artists and performers from a diverse representation of Bronx cultures. Think Sugar Hill Gang, breakdancing, Doo Wop music, and salsa and mambo, too! And there will be Cuban and Puerto Rican food, as well as Italian food from Arthur Avenue.

And there are great video teasers for the series. For instance, in this one, Grandmaster Caz talks about how the the Boogiedown borough inspired them. And he says the Bronx Zoo (and the Yankees) are synonymous with the borough!

Grandmaster Melle Mel and Scorpio of the Furious Five take the stage April 21, May 12, and May 13. You don’t want to miss it. Learn more.

See more here. Buy a print at his Etsy shop. 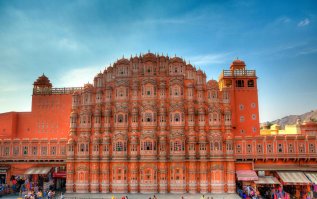 Via Mark Naison, professor of history and African American history at Fordham University:

Growing up in Crown Heights in the 1950’s, the child of two teachers who had come out of dire poverty to scrape into the middle class, I viewed politics and government as abstractions, frightening and remote. Between my parents whispered talks of McCarthyite purges, the mushroom clouds I saw on tv, and the shelter drills we had in school, politics was scary. Televised pictures of Eisenhower and Nixon, who looked nothing like the Jewish, Italian and Black People in our neighborhood, made it remote. I was told by my parents never to sign a petition, the Constitution was something we memorized in school and trying to become President seemed absurd for people in my section of Brooklyn.
So how did I become “American,” attached to the possibilities, mythologies, and opportunities the nation offered to people of modest means who came from immigrant backgrounds?
It was sports and music which made me American. Watching Mickey Mantle, Willie Mays and Duke Snider play center field; watching Carl Furillo, who had the same face as many of my Italian friends, throw bullets from right field; listening to Frankie Lyman and the Teenagers; Dion and the Belmonts, and Little Anthony and the Imperials, kids who came out of neighborhoods just like mIne, create beautiful harmonies and sell millions of record; watching Giants linebacker Sam Huff try to tackle the great Cleveland running back Jim Brown! These were things that brought fame and fortune to kids like me, things that showed that anything was possible in America even if you grew up with very little or were stalked by ancient hatreds, such as the anti-semitism that was so much a part of my parents childhoods.
Read more here.

In introducing his dances, his stories, and his regalia to the crowd, Raymore described how each tradition was “gifted” to him. In each introduction, he credited a specific person. After the performance, as he walked across Edwards Parade to have his photo taken, he explained why. 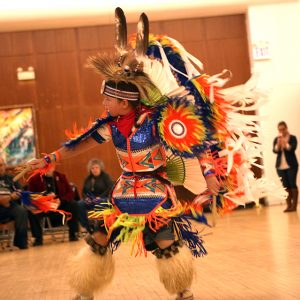 “In our culture, everything is a give and a take. We don’t just cut down a tree without purpose, or without making an offering in its place,” he said. “It’s always an exchange of energy or a blessing. That’s what we as a people do.”

Host and emcee Bobby Gonzalez, a Bronx-based community organizer, said most of the dancers that came to Fordham had volunteered to share their culture. It was in that same spirit that Raymore gifted a story, “How the Crow Became Black,” to all those gathered.

“It’s a story that reminds us not to judge each other, that we each have a gift that was given to us by our Creator, and that we’re here to share that gift with each other.”

How the Crow Became Black

A long time ago, Mother Earth’s shawl was covered in snow, so much snow that the animals were freezing. The animals held a grand council to decide [who]should visit the Great Spirit [to ask for help]. 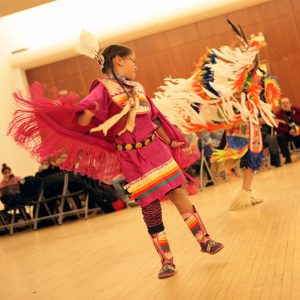 Creator asked Rainbow Crow, “What can I give you for this gift of that beautiful song?” Rainbow Crow said “Everyone is freezing on earth, can you make it stop?”

But once Creator thinks about something it cannot be unthought—that’s the power of thought.

So, he told Rainbow Crow, “I’ll give you this gift of fire.” Creator stuck a torch into the sun and gave it to Rainbow Crow. But being a winged bird, the only way he could carry this gift of fire was in his beak. Rainbow Crow flew back as fast as possible, past Grandfather Sun and Grandmother Moon, finally reaching Mother Earth. When Rainbow Crow put that fire down, all the animals of earth rejoiced. They were dancing and they were excited because life would go on.

But, for Rainbow Crow, his once beautiful feathers had been scorched black from carrying the the fire back to earth. And the beautiful singing voice that he once had was gone. It sounded like what you hear from the crows just outside: “Craw! Craw!”

Creator noticed that Rainbow Crow was sad and he said to Rainbow Crow, “Do not be sad. When grandfather sun shines his light upon you, you will see the colors of the coat you once had.” That is why when you look at a crow today they have an iridescent color to their feathers. Creator then said, “Rainbow Crow I will make it so that when the humans come they won’t hunt you because I’ll make your meat taste like burned flesh. And they won’t cage you for your beautiful singing voice.”

That was enough for Rainbow Crow. And that is how the crow became black.

Watch a video from the event here.

I am grateful that I was able to visit a few of the islands impacted by Hurricane Irma in 2016: Puerto Rico, St. Martin and Martinique.

Puerto Rico, while having lost power on some of the island, seems to be doing fine. St. Martin, however, is said to have suffered much damage. I never took photos while in St. Martin as I left my camera on the cruise ship. But I did take pictures Martinique, a French Caribbean island, which is also said to be doing OK post-Irma.

BUT IT’S REAL! My friend Michelle is on vacation with her family in Lago Di Braies, Italy. ZOMG. #goals

Scene By Gina
Blog at WordPress.com.