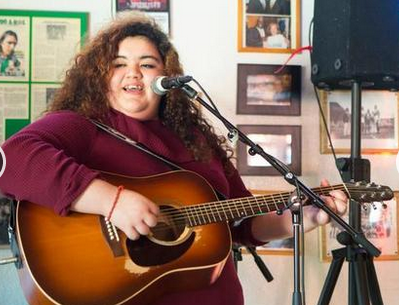 *** I work with Making Movies, and when I see the fruits of their M.U.S.I.C.A. camp (in conjunction with Kansas City’s Mattie Rhodes Center), I can’t help but be amazed at the power of music.

Regina del Carmen Sanchez wants to someday make her living writing music, playing her guitar and singing songs that have a message about the world as she sees it.

At 14, Regina’s world is pretty small.

It revolves around the little house she shares with her mom and grandparents on the west side of Kansas City’s urban core. The women of the house spend weekends frying, baking and selling empañadas to supplement the income Regina’s mom brings home as an office assistant.

“It’s my dream to become a musician to change people’s lives, to help them understand in an easy way what is happening in the world,” Regina said.

So when she sat down to create her first song, she wrote about being poor, being afraid to open bills, worrying that one not-in-the-budget problem could mean the lights go out.

She was 12 when she wrote “Keep Your Head Up.” It took her several months, writing at home as she lay across her bed or sat at the kitchen table. Sometimes even during breaks in class a lyric would pop into her head and “I would have to write it down right then,” Regina said.

“At the time I was thinking, ‘Let me write a song about the real struggles in my family instead of a song that’s just about me, talking about me,’ ” she said.

My house is in shambles but it beats being homeless.

It’s hot in the summer time, but in the cold the heat’s hopeless.

The bills are coming in and I’m looking so nervous,

because any day now, they could disconnect my service.

The song goes on about needing money, crying and praying, and wondering how long one could endure.

Love yourself and never give up. You’ll see a better life if you keep your head up.

Hand me down clothes but I’ve never been shirtless. B een misunderstood but no I’m not worthless.

Labeled a misfit ’cause I’ve always been different. Don’t want to be a number or another statistic.

Keep your head up …

“When she sings this song, you can tell she’s gone through it,” said Juan Carlos Chaurand, who plays percussion and keyboard for Making Movies, a four-member band from Kansas City with an Afro-Cuban/indie rock vibe.

Chaurand said that providing inexpensive lessons and a chance to make music to children who otherwise might not have the opportunity is the band’s contribution to efforts to break the cycle of poverty.

One day Regina sang her song for the band members. They helped her write the music and took her to a studio to record it.

“It’s a great song,” Chaurand said. “To see that come out of her is pretty amazing.”

Read the whole story here. Watch a video of Sanchez performing the song with Making Movies below.