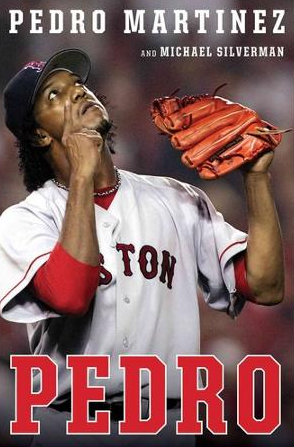 Lord knows I’m no fan of Pedro Martinez or the Boston Red Sox, but I must say this NPR interview with the Dominican-born pitching great on All Things Considered has me seeing him in a different light.

Why? Although he says he doesn’t hold grudges, he says he’ll never tip his hat at Fenway Park again because they booed him once. WOMP. 😉

Martinez was on to promote his new memoir Pedro (Houghton Mifflin Harcourt, May 2015).

But seriously, he surprised me. He admits he’s a fan of Roger Clemens, and he also goes on to explain that haunting “Yankees ‘are my daddy'” comment. He chalks it up to a bad translation of a Dominican saying meaning someone has your number.

People from Barranquilla, Colombia, (where my parents are from) also have that saying, and it’s why the battle hymn for our local football team, Júnior de Barranquilla, is “Junior tu papá!” So it definitely translates, Pedro.

Anyway, listen to the interview below. He actually makes the team I disliked so much sound … fun? (Yep. I surprised myself.) And read an excerpt of it here via Sports Illustrated.